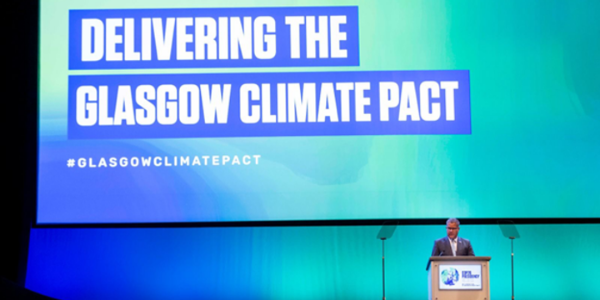 The event marked six months since the end of the historic COP26 UN climate change conference and the signing of the Glasgow Climate Pact. Mr Sharma delivered a speech to attending guests, as well as a global live stream at which he warned world leaders that failure to honour commitments made at COP26 would be an ‘act of monstrous self-harm’.

Joined by representatives from business, civil society and young people in Scotland, Mr Sharma also set out his vision for the second half of the UK’s COP Presidency as well as updated on progress since the main event and discussed the priorities in the lead up to COP27 and the prospects for climate action in a changing world.

Against the backdrop of current international crises, Mr Sharma stressed the urgency of countries fulfilling promises made at COP26 and that the global community must move much faster in taking climate action over the next six months. He said: “Every country must respond to the call to revisit and strengthen their nationally determined contribution (NDC). And they must do so in 2022. The Glasgow Climate Pact calls on countries to look again at their NDCs, not at some vague point in the future, but this year, in 2022.”

The event also coincides with the publication of the COP26 Sustainability Report, which demonstrates the lasting, positive legacy of COP26 on the city of Glasgow and beyond. The report sets out the conference’s impact on Scottish charities and low-income families, including donations of 6,000 items of furniture, 15,000 square metres of carpets, and 600 laptops, some of which it is hoped will soon go to Ukrainian refugees.

Peter Duthie, Chief Executive of the SEC was delighted to welcome Mr Sharma back to Glasgow. He said: “For many organisations in Glasgow and throughout Scotland, hosting COP26 acted as a real catalyst to amplify or accelerate sustainability action. Monday’s speech from Mr Sharma has only reaffirmed the urgency for us to act at pace.

“Driven by COP, we launched a Sustainable Food Strategy with a minimum of 80% of all ingredients used on campus sourced in Scotland. We have also developed a comprehensive sustainability strategy supported by the five pillars of Climate, Resource, People, Partnerships, and Governance. The SEC is committed to becoming a net zero campus by 2030, in line with Glasgow’s own ambitious target. At COP we became founding partner of the Net Zero Carbon Events pledge, an initiative to connect the events industry globally in addressing climate change.  We have also recently achieved a Greener Arena Certification for the OVO Hydro, the first venue in the world to do so.

“We want to leave a lasting legacy for the SEC by changing behaviour, practices and process, reducing our impact on the environment and ensuring the SEC as a venue that delivers sustainable events.”

Tom Clements continues as President after landmark NOEA… 30 November 2021
The Future of Conference & Event Food 17 September 2021
What happened to the event materials used at COP26? 1 March 2022