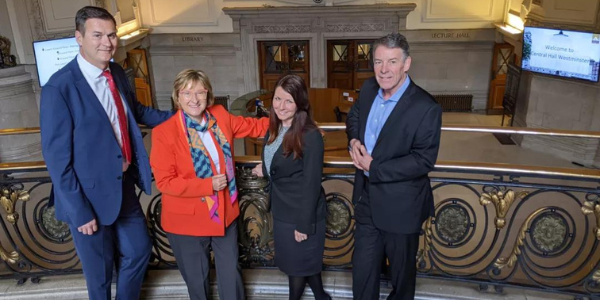 Venue Management organisation, Central Hall Venues (CHV), today announces the reshaping of its entire team structure in a radical overhaul for future growth. The move comes after CHV acquired two new UK-wide event venues in 2021, Nicolson Square Edinburgh and St Saviourgate York and plans further expansion. As a result of the changes, the entire Executive Director team has been reshaped, alongside the creation of a new Group Management Team to manage the growth of the multi-venue operations and pursue new opportunities in the venue management marketplace.

After 11 years as Managing Director of Central Hall Westminster, Paul Southern is stepping back from his operational role to focus on his family while reducing his workload and 5-hour per day commute. Paul, who was instrumental in launching Central Hall Venues just over a year ago, will continue to support the team on developing the CHV group. Meanwhile, the Rev’d Tim Swindell will step back from his operational responsibilities as Executive Chair while continuing to serve on the board as a non-executive Chair.

Three new key roles have been created to head up CHV and realise its future goals as a growing multi-venue organisation for the UK. Sarah Ainsworth will become full-time Chief Executive Officer (CEO), providing overall leadership, leading the development and implementation of Board strategy across the CHV portfolio of venues with the aim of building and strengthening the teams, while achieving commercial success, investment and growth. Sarah, who has worked with Central Hall Westminster since 2016 as Finance Director, is a Chartered Accountant with 30 years’ experience in a variety of audit, finance, risk and operational management roles across multiple sectors. She also has significant experience as a non-executive director and trustee for not-for-profit organisations and charities. She will be supported by Sarah Franczak who has been promoted from Sales and Events Director to Chief Operating Officer (COO). Sarah, whose role will be to lead all operations and customer service, is an experienced venue management professional, having worked in the events industry for 22 years. Her most recent role was as Head of Venues at BMA House where she took full responsibility for strategic direction, operations and finance as well as overseeing financial risks. Gary Savage has been appointed Chief Financial Officer (CFO) to direct and oversee all financials and audit activities of the organisation. Gary, a Chartered Accountant with over 25 years’ experience within the private, public and education sectors, joined Central Hall Westminster in 2018 as Financial Controller.

These key roles, together with the non-executive Chair and non-executive Directors will form the new board of Central Hall Venues. Methodist Central Hall Westminster’s (MCHW) Superintendent Minister, the Rev’d Tony Miles, continues as Deputy Chair. The existing Senior Management Team will be replaced by two new teams consisting of a Group Management Team led by the CEO to focus on the implementation of strategy and growth, while the current Operational Meetings will be replaced by an Operational Committee led by the COO to focus on the delivery of commercial activities. The newly-formed Group Management Team, has also led to the creation of three new roles. These include Anna Glazebrook as Head of CHV Communications, Emre Cevik as Head of Venue Operations for Central Hall Westminster and Chris Williams as Head of Venue for CHV’s third site, St Saviourgate York. CHV will also be appointing a new Head of Events for Central Hall Westminster in the coming months.

Paul Southern, Managing Director of Central Hall Venues, comments: “After 11 amazing years at Central Hall Westminster which saw enormous change and growth at this iconic venue from the boom times to the most recent COVID-related challenges, I felt now was the right time to step back as the organisation enters an exciting new phase.”

“Although I will be concentrating more on family time, I am delighted to be continuing on a consultancy basis to help shape CHV’s strategy for growth,” he adds.

CHV’s new CEO, Sarah Ainsworth, comments: “I am hugely excited about being appointed Chief Executive Officer of Central Hall Venues at a time when we have already seen success in taking on two new venues last year, Nicolson Square Edinburgh and St Saviourgate York. I am really looking forward to replicating that success and continuing our mission to support other historic Methodist buildings as popular and successful event venues while maintaining their upkeep and donating to charitable works across the world. Our close ties with Methodism ensures a fully transparent approach to business and we continue to uphold our long-held principles of ethics, integrity and sustainability.”