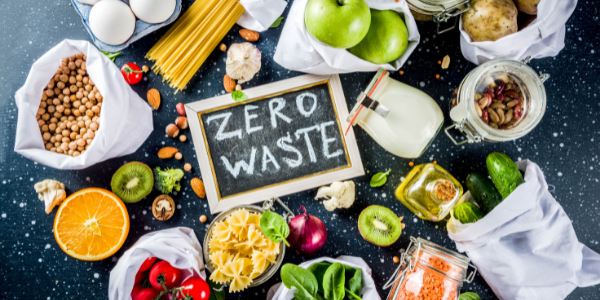 A survey shows just 24 per cent of food and drink businesses in Scotland think food waste is a significant contributor to climate change. That’s despite Scotland, as a whole, wasting 988,000 tonnes of food and drink every year.

In response, Zero Waste Scotland has launched a nationwide challenge to crown Scotland’s culinary champion of food waste – a single professional or business whose recipe can turn what could have gone to waste into delectable treasure.

The search for Scotland’s best waste-less scran was launched at the beginning of Food Waste Action Week (7 – 13 March). It will see cooks across Scotland enter their best recipes that primarily feature ingredients commonly wasted in kitchens, such as bread, or use up the parts of food items that people don’t usually eat, for example, broccoli stalks.

Food Waste Action Week is an annual campaign led by Love Food Hate Waste and WRAP to raise awareness of the devastating impact that food waste has on the planet.

The competition to find the most delicious way to tackle food waste will see Zero Waste Scotland challenge food and drink professionals to rustle up their best no-or-low waste recipes: from chefs in top restaurants, to Scotland’s hospitals and schools; and food manufacturers, right through to cooks in community groups.

The winner will be selected from a list of entrants who have met the criteria of simplicity, taste, time, ingredient use, and ingenuity. BBC MasterChef champion and Scotland’s National Chef, Gary Maclean, will be lending his culinary expertise as part of the judging panel. This will be the latest partnership between Maclean and Zero Waste Scotland following their collaborative campaign to raise awareness of food waste during the festive season.

The competition’s top chef will then win a bespoke prize package from Zero Waste Scotland. This will include hands-on support to further reduce food waste and become more resource efficient, as well as promotion of their environmental initiatives.

To compete, entrants should visit the dedicated competition page on the Zero Waste Scotland website to download a submission template which can then be sent to food.drink@zerowastescotland.org.uk. Entrants must check the full criteria before applying. The competition closes on the 1st of September 2022.

“Food waste has a devastating impact on the environment and should be taken as seriously as plastic waste.

“We know many food and drink businesses in Scotland are already doing their bit, with our research indicating 43 per cent rank reducing food waste as one of their top priorities. However, we also know only 14 per cent consider food waste every day. We’re calling on expert chefs to show off their planet-saving recipes and showcase their commitment to tackling the climate emergency.

“Businesses will benefit greatly from reducing food waste, both sustainably and financially, and with over 80 percent of the UK population concerned about climate change getting involved in Food Waste Action Week is a great way to show customers, clients and employees that you and your business share their values.”

According to research from WRAP, the top four most wasted ingredients in the hospitality and food service sector include potatoes, bread, pasta and rice.

An estimated 1.3 billion tonnes of food are wasted globally every year, roughly one third of all that is produced for human consumption.

When food is wasted, all the energy and resources that went into producing, processing, transporting and cooking it also goes to waste. This is why food waste is so dangerous for the climate. Businesses also lose the money they spent – meaning that they are less efficient and less competitive.

On top of this, if food waste then ends up in landfill, it generates even more emissions in the form of methane, a gas many times more harmful to the environment than carbon dioxide.

“Scotland is world renowned for its delicious, first-rate food and drink. But if we’re serious about our reputation as a hotspot for top-notch cuisine, then we must urgently stop perfectly edible food from going to waste. In a post-COP26 landscape, the food sector now has a golden opportunity to prove its environmental credentials too.

“I think it’s extremely important for trainee chefs to embrace food waste reduction from the get-go. As a professional, fully understanding where your food comes from, and the energy and resources it takes to get it onto the plate, is crucial. So, there’s every reason to make sure none of it is wasted.

“The bottom line is that everyone in the food sector in Scotland has a lot to gain from reducing their food waste. There are potential savings in-store, plus a new market of eco-conscious customers, so I’d encourage all to apply to Zero Waste Scotland’s competition.”

Zero Waste Scotland operates a dedicated Food Waste Reduction Business Support service to help businesses in Scotland identify how, and how much, they could save by reducing food waste. Almost 280 businesses have already benefited from the support, with typical cost savings of £5,000 a year.