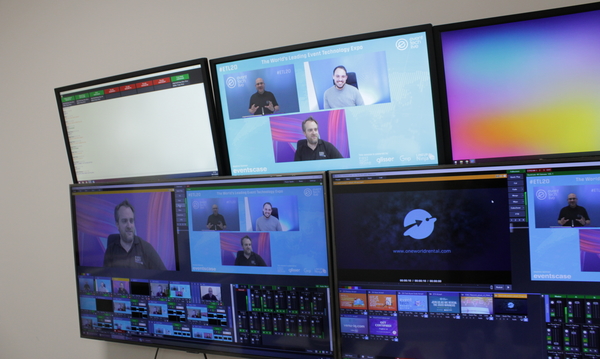 With president and CEO at INVNT, Scott Callather, Mayank Mohta, co-founder of Cloud Data Summit, and Scott Wilcox, chief innovation officer and partner at SXSW, among the names already confirmed for the show, content is still captain as ETL steps across the pond for the first time. And, having provided production for Event Tech Live UK & Europe for more than five years, First Sight Media is perfectly positioned to deliver.

Uncertainty was everywhere after the first Covid-19 wave, the British government and its people desperate to get the economy, to get life, moving again. With trials underway late summer and conferences/exhibitions pencilled in for an October 1 restart, Event Tech Live UK & Europe 2020, planned as a hybrid show, had to pivot to fully virtual some four weeks out when the second wave took hold and shutters came down again.

First Sight Media played a pivotal part in that process and the USA & Canada show will be a whole lot more straightforward as a result, despite the time difference.

“The fact we have been able to keep the same team and deliver a traditionally physical event virtually, then put together a show for the USA & Canada under the same constraints, is a testament to the team; to the companies who provide their experience and their expertise,” Adam Parry, Event Tech Live co-founder, says

“First Sight Media is one of ETL’s core ingredients, a relationship that goes right back to 2014. It’s a company that understands Event Tech Live and has the expertise and the technology to ring the changes and to leave us in a perfect position for the inevitably hybrid future.”

Used to running multiple simultaneous sessions and streams, First Sight Media’s five production studios, recently extended, are equipped to deliver an ambitious broadcast solution for ETL USA & Canada. A format that brings an extra element of engagement and even greater options for audiences to choose from, as they would at an in-person event, together with the buzz of live, the opportunity to interact with speakers during and after sessions, stepping up the overall experience.

To that end, rehearsal is vital. Most speakers are now familiar with delivering online but all technology is different and First Sight Media, behind more than 500 fully virtual events over the last nearly 12 months, has found a distinct difference when contributors have prepared for a specific format and when they haven’t.

Due to start in May, that preparation will mean speakers are comfortable with the process, which comes across on screen, and the overall delivery of their sessions will be smooth. A crucial element as the show finds its feet in North America.

Event Tech Live passed the test of its first pivot last November, working closely with its partners, so ETL USA & Canada is a next step for the formula.

Certainly, with a growing team and continuous improvement on production values in this fast-moving new environment, ETL USA & Canada attendees can expect a number of enhancements to the model from First Sight Media.

“This has been planned as a virtual event from the outset so we will be approaching it with the benefit of time and what we learned during vETL20,” Belcher says. “Delivering more ‘live’ content through additional streams and therefore encouraging more attendee engagement as well as scheduling rehearsals and recordings.

“We will have to juggle the time zones of all the contributors – although we did that for vETL20 – and they will be weighted to Central Time. Otherwise, we have fully global tech solutions, so our approach is tried and tested.

“What we can count on with ETL is a high calibre of content and we’re looking forward to rehearsing with industry friends old and new to deliver an exceptional first Event Tech Live USA & Canada.”

For more information about the inaugural Event Tech Live USA & Canada have a look at the website: https://www.eventtechlive.com/etl-us-canada