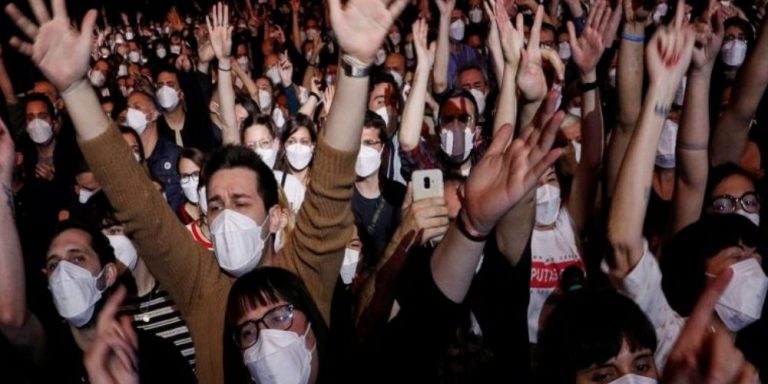 “Light at the end of the tunnel.”

That’s how organisers described the news that a pilot rock concert in Barcelona resulted in no significant Covid-19 outbreaks.

Almost 5,000 music fans were allowed into the Palau Sant Jordi arena in March to watch Catalan indie rockers Love of Lesbian – with no social distancing.

In the two weeks following the event, only six cases of Covid-19 were detected among the audience. Organisers said that four of them believed the origin of their infection was from the concert and none of the infected people required hospitalisation.

Dr. Josep Maria Llibre, who led the study, said it was proof that events can return safely.

He said: “We can be sure this has not been a super-spreader event, because there’s no sign that the incidence of SARS-COV-2 infection was increased, and actually we have no signs that there were any infections among the assistants, so this is very reassuring data and we believe that can be helpful in opening cultural activities everywhere in the world.”

The attendees were required to take a test at one of three facilities on the day of the show. They got their results in under 15 minutes via an app, with a negative result granting them access to the 17,000 capacity Palau Sant Jordi arena.

Tests and face masks were included in the ticket price.

With the results coming in the same week that the UK hosted its first in-person pilot business event without social distancing, it’s perhaps inevitable to want to compare the two.

The major difference was that in Barcelona, attendees were required to wear masks throughout, whereas in Liverpool masks were optional – and largely unused.

Looking at the pictures, it’s clear that the Spanish gig-goers got much closer to one another in large numbers than anything we’ve seen in recent times.

The numbers from the Barcelona pilot are hugely encouraging – and certainly whet the appetite for further results from the Liverpool event, which should arrive in the coming days and weeks.

It’s so nice to have a positive image of people gathering in large numbers again. The pictures of mass crowds at last year’s Cheltenham Festival have become ingrained in the national memory as a reminder of the UK’s errors in the early days of the pandemic. It’s important that we shift this dial, and that images of people gathering in large numbers lose their negative connotations.

We had another boost over the weekend as The Crucible in Sheffield hosted a capacity crowd for the World Snooker Championship final. Almost 1,000 masked fans packed the theatre, making it the first UK sporting event in more than a year to play in front of a sell-out crowd.

And the pilot events in Liverpool continued with 5,000 rock fans packing a marquee in Sefton Park for a mini-festival headlined by Stockport band Blossoms, and 3,000 clubbers returning to the dance floor for a club night – all without masks and social distancing.

If we carry on getting good news stories like this – and the data continues to head in the right direction – it can only boost the events sector’s Covid-19 recovery.

New study reveals how Scots feel about the return of… 27 May 2021
EXECSPACE return with new client tech 19 May 2021
EVENTIT to return later this year with 5th annual event! 3 June 2021