The eyes of the world will again be on Glasgow in two years’ time as the city, along with Berlin, hosts the European Championships – a new multi-sport event at which more than 3,000 athletes will compete in aquatics, cycling, gymnastics, rowing, triathlon and a new team golf event.
Promising to be an incredible celebration of world-class sport, the championships in August 2018 will also build on Scotland’s enviable track record for hosting international sporting events, such as the 2014 Commonwealth Games, the 2014 Ryder Cup and the 2015 World Gymnastics Championships.

The occasion was the subject of discussion at the Host City Conference held in Glasgow in November. David Grevemberg, chief executive of the Commonwealth Games Federation, Kulveer Ranger, vice-president of public affairs and strategic communications at Atos UK, Itay Ingber, chief operating officer of Matchvision and Julian Ternisien, head of sports rights at the European Broadcasting Union debated the emerging multi-city and multi-sport phenomenon.

Speaking to EventsBase before the conference, Kulveer Ranger, who worked for the Lord Mayor of London on Tech City as well as transport for the 2012 Olympics and Paralympics, and presented to FIFA the city’s transport bid for the 2018 World Cup, outlined his thoughts on how disruptive innovation and digital transformation are impacting events.

“It’s an interesting change in how games are structured and a challenge in how you deliver that new experience for both those who attend in person and those who view and participate through devices, platforms and television,” said Ranger.

“It is an ideal time to try the multi-city format because for the Olympics in Rio this year, for the first time we hosted a large chunk of the technology via the cloud from the [Atos] technology operations centre in Barcelona. That’s a big change from how things have been done before and is really the direction of travel.”

The centre supervised all 144 competition and non-competition venues, monitoring and controlling the IT systems that supported the running of the Games and the delivery of the results from the Olympic and Paralympic competitions to the world’s media in real time. It was a milestone in the digital transformation of the Games, being the first time that the cloud was used for key applications including the volunteer portal and the accreditation system.

At its peak, there were 500 technologists monitoring and managing infrastructure around the clock, including IT security, telecommunications, power and the results systems. It was staffed by a combined team comprising Rio’s technology specialists and Atos, along with its technology partners and will be the model for future Games.

“It means that less and less will huge teams and large amounts of kit need to be set up in a host city,” said Ranger. “And now, with multiple host cities, there’s a convergence of opportunity because the cloud means that joint hosts do not need to double-up.”

Technology is opening up opportunities for spectators, as well: “That’s the other exciting side of the coin; that experience factor. If you are at the event, the amount of information that you will be able to tap into via the technology ecosystem that you have built around you – your devices, your apps – will be phenomenal, providing all kinds of information – both historical and real-time – on the athletes.

“And as virtual reality and interactive augmented reality develops, that richness of experience, the feeling of ‘being there’, will be available to people around the world. While we don’t want the experience of events to lose their purity – which is witnessing somebody performing at their absolute best – there is an opportunity to magnify that person’s efforts so people can share and appreciate the achievement. And I think that’s when technology works best.” 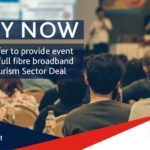