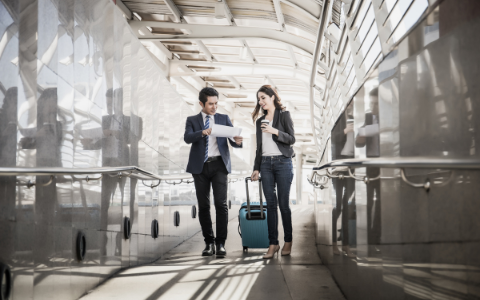 The pandemic left a frenzied 18-month period of restructuring, refinancing and acquisitions in its wake — or as one expert put it, an “arms race.”

As a result, many of the bigger corporate travel agencies look vastly different compared to before the pandemic. They also have a new set of priorities, reflecting the altered and likely much smaller trading landscape that lies ahead.

But even with business travel volumes recovering to just 80 percent of 2019 levels by the end of 2023, Greg O’Hara, founder of private equity firm Certares, predicts they’ll end up more profitable than before as the pandemic has forced them to become leaner, more efficient machines.

How lean did they get? O’Hara’s private equity firm manages a fund that owns 50 percent of the world’s biggest corporate travel agency, American Express Global Business Travel. This agency had 17,000 employees globally before the pandemic, but today that number is 14,000.

It’s not the only agency to have shrunk. As early as April 2020, Flight Centre Travel Group, which includes corporate travel brands FCM and Corporate Traveller, slashed its 20,000 head count by 6,000 people.

Fellow Australian brand CTM also cut costs, announcing 1,000 layoffs last year, although reports suggested overall it may have cut up to 40 per cent of its local and international staff. It wouldn’t comment to Skift on exact pre or post-pandemic figures.

Meanwhile, U.S.-based CWT continually restructured during the pandemic. The company told Skift last year there were extended furloughs, changes to part-time roles and voluntary redundancies, but it wouldn’t confirm any numbers at the time. However, it has offloaded its huge $1.5 billion debt to hit the recovery on surer footing.

BCD Travel also succumbed to pandemic pressures, axing 3,000 employees from its workforce of 14,900 in October. CWT and BCD did not respond to requests for current numbers from Skift in time for publication.

Pretenders to the Throne

While there was cost cutting to be done, there were notable shopping sprees too. At the top end: Amex GBT is in the process of buying Egencia; CTM acquired Travel and Transport; TripActions bought Reed & Mackay; and TravelPerk swooped on Click Travel.

Barcelona-based travel management platform Travelperk has grown considerably these past 18 months. In March 2020 it had 400 employees, and after acquiring Click Travel in July that number climbed to 600. It also raised $160 million in April this year.

“We’re one of the few players in the travel industry that continued scaling and growing since the beginning of the pandemic with a strategy that didn’t involve any layoffs,” said Avi Meir, co-founder and CEO of TravelPerk.

TripActions, meanwhile, has secured $280 million across two fundraising rounds since the start of the pandemic. A spokesperson told Skift it was roughly back to pre-pandemic levels, at around 1,500 employees, when including those onboarded as part of its Reed and Mackay deal, which saw it take on 450 employees in July this year.

TripActions has its sights set on moving up the ranks, taking over some of the “legacy” agencies’ enterprise-sized customers, while TravelPerk is actively pursuing small and medium-sized businesses. “That’s where we think there is the biggest need, and the biggest growth potential,” Meir added. “There is so much opportunity in our industry as companies look to get back traveling after the pandemic, and so much we can do to help them do that.”

The problem is, other larger agencies are also targeting small and medium-sized businesses, a market that used to be serviced by smaller agencies. Should they now be worried? And how are company travel managers reacting to having new-look agencies?

“The agency landscape has always been in a constant state of evolution,” said Scott Davies, CEO of the UK’s Institute of Travel Management, which represents 4,000 travel buyers and suppliers in the UK and Ireland. “The players are always adjusting their value propositions. From a travel buyer point of view, there’s no cause for concern, there’s still a lot of choice out there.”

However, they appear to be shopping around a little more than usual.

One quarter (28 percent) of buyers have switched travel management companies over the last 12 months, according to a poll of 313 European business travel managers by the Business Travel Show Europe. A further 36 percent plan to move their business by summer next year. When asked why they had swapped, 52 percent replied it was because their agency had not provided them with enough support during the pandemic.

Davies said many companies were appraising how they were treated during the pandemic, which was resulting in higher “churn.”

“In any given year, about a quarter to a third of corporates will send out requests for proposals for a new agency. That’s normal. But now they’re looking to actually change, not test the market or benchmark,” he said.

One issue that might bubble up, once travel resumes, is how well the bigger agencies will cope with dealing with so many customers, many of whom will be new if brought over from an agency they’d acquired.

“Travel buyers are thinking about their agency’s ability to scale up,” Davies added. “Some of the complexities involved with travel as it starts up again, around borders and testing requirements, technology is unfortunately struggling to solve. When travel restarts, it’s quite people-intensive on the agency side.”

However, he said travel management companies were the “great chameleons” of the travel industry. “They’re adaptable, resourceful and dynamic organziations. Whenever’s their complexity, they’ve got a long history of rising to that challenge.”

As for smaller agencies, the potential lack of service in the future has prompted one former CEO of CTM to launch his own business.

“(The agencies) are busy merging those businesses, and as a result of that, it’s like trading with a new company,” said Chris Thelen, CEO of startup agency TakeTwo Travel Solutions. “You pick up the phone, the agents aren’t the same, your account managers aren’t the same. They’re focused on integrating their new businesses. The feedback from the customers we’re looking after is that they’re not feeling the love, or the attention.”

Thelen, who was previously CTM’s North American CEO, said his vision was for Take Two to be a next generation independent. “You’ve got the CTMs, the TripActions, Egencia and Amex GBT, all of this massive arms race, and I think the customer’s a bit lost really,” he added.

She added Blue Cube had won eight new clients in the last two months, six of which had never used an agency before.

“The bigger agencies will always be there, to try and take on all the smaller enterprises, but they’ve never done it that well. Their problem is scaling up enough to give the small customers the service they need,” Deadman added. “Everyone talks about how technology will take over, and it will, to streamline things, but nothing compensates for human beings saying ‘it’s fine, I’ve got you.’”

However, while there may be more companies looking to try an agency for the first time, having seen the pandemic cause so much chaos, these smaller agencies will increasingly be competing with larger agencies for that same market, and other private-equity backed startups looking to take advantage of the travel recovery.

“Here we are, in the most difficult time for our industry, and we’ve never had more startup agencies as a proportion of total market,” said Davies. “Some of the ones who were the new kids four, five years ago, like TravelPerk and TripActions, have consolidated to grow quickly. It’s a fascinating time for the sector.”

Via Matthew Parsons at Skift.