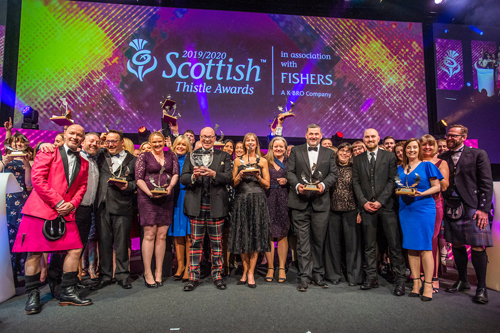 Brigadier David Allfrey, the outgoing Chief Executive and Producer of The Royal Edinburgh Military Tattoo, has received the prestigious “Silver Thistle” for his contribution to the events industry.

Brigadier Allfrey received the accolade at the national final of the annual Scottish Thistle Awards ahead of his retirement from the role at the end of this year; he was described by judges as an ‘inspiring leader of many in the industry’ and was commended for ‘always finding the time for others to share his thoughts and to support initiatives to help grow quality tourism in Scotland.’

The Brigadier has held the position of Chief Executive and Producer of The Royal Edinburgh Military Tattoo for 10 years and has helped transform the much-loved annual event in Edinburgh into an international entertainment brand celebrating military music and tradition that attracts audiences of 220,000 to Edinburgh Castle esplanade as well as 100 million viewers from around the world.

Edinburgh Festival Fringe 2018, Paisley Halloween Festival and Aberdeen International Airport were among those honoured with the highest accolade in the Scottish hospitality and tourism sector.

The National Final of the Scottish Thistle Awards took place at the Edinburgh International Conference Centre on Thursday, where 470 people gathered to see 18 individuals, businesses and events honoured for their contribution to the tourism sector.

Edinburgh Festival Fringe 2018 received the inaugural Inclusive Tourism award, sponsored by The Cumberland Building Society. Introduced for the first time this year, the award celebrates a business of destination offering a service that can be enjoyed by all. Edinburgh Festival Fringe attracts thousands of international visitors each year to watch live performances across a plethora of art forms, with over 150 countries represented on and off stage. As well as building inclusive practices into the services it provides, the society also encourages external partners and venues to build accessibility into their approach with judges praising their global influence.

The All-Energy Exhibition & Conference 2019, which took place at the Scottish Event Campus, was awarded Best Business Event, sponsored by P&J Live, which celebrates the importance of business events in showcasing Scotland’s world-class credentials as a destination for congresses, meetings and incentives programmes from around the world.

There was also a special award for The 2019 Solheim Cup which was held at Gleneagles in September. The special recognition award was accepted by European Solheim Cup Director for the Ladies European Tour, Polly Clark, and Catriona Matthew, who captained Team Europe to victory in dramatic fashion and who was shown receiving the award in a pre-recorded film at Thursday’s awards ceremony The event, which was the highest attended women’s golf event ever held in the UK, helped showcase women’s sport to new audiences as well as helped shine a spotlight on Perth & Kinross and Scotland as a world-class and accessible tourism destination with images from the thrilling event beamed around the world.

The 2019/20 Scottish Thistle Awards, in association with Fishers, rewards hotels, restaurants, B&Bs, visitor attractions, business and consumer events, and individuals going above and beyond to create a destination and visitor experience worth talking about amongst our valuable tourism industry.

“On behalf of the industry panel, I would like to extend a huge congratulations to all of the national winners of the 2019/20 Scottish Thistle Awards. These awards are firmly established within the tourism industry in Scotland and these winners should feel very proud to join the prestigious roll of honour that celebrates innovation, success and excellence in the Scottish hospitality and tourism sector.”