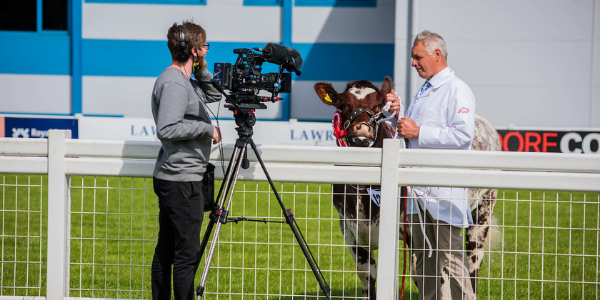 The Royal Highland Show will take to the small screen to livestream this year’s 200th anniversary event across the globe.

In what has been described as a ‘game changer’ for the Royal Highland Show, organisers have successfully secured £200,000 of funding from the Scottish Government to drive this ground-breaking initiative. The funding will be administered by EventScotland, part of VisitScotland’s Events Directorate, on behalf of the Scottish Government.

The free-to-view RHS TV will see a dynamic mix of live and pre-recorded content broadcast throughout the four days, featuring the perfect balance of livestock judging, equestrian classes, culture, interviews, food & drink and of course, the grand parade. Presenting RHS TV in the mornings will be Dougie Vipond, with Sarah Mack taking the reins in the afternoons.

Not only beamed across the globe, RHS TV will also be transmitted across the showground on giant screens throughout the four days. The content captured will be available to watch back on the Royal Highland Show YouTube channel.

The exciting announcement follows on from the success of the Royal Highland Showcase in 2021, which saw a total audience of 345,701 viewers watch the action online from across 97 countries.

Bill Gray, Chairman of the Royal Highland and Agricultural Society of Scotland (RHASS), organisers of the Royal Highland Show, said: “This is a hugely exciting announcement which will allow us to bring the best of food, farming, and rural Scotland to audiences across the globe. The value the Show brings to the economy and also to Scotland the brand is reflected in the level of support we have received from the Scottish Government, for which we are very grateful.”

The announcement is just one of many exciting new initiatives planned to make the 2022 Show, which marks 200 years since the first Show took place, a spectacular event.

Bill added: “RHS TV also presents great opportunities for sponsors and exhibitors to extend their reach beyond the 200,000 people expected to attend the event. This is yet another way in which we can add value and also generate revenue which allows RHASS to fulfil its charitable activities.”

Paul Bush OBE, VisitScotland Director of Events, said: “The support of the Scottish Government has ensured the organisers of the Royal Highland Show are able to continue to embrace innovation and build on the success of last year’s Showcase with RHS TV.

“Scotland is the perfect stage for events and the dynamic mix of live and pre-recorded content to be broadcast via RHS TV will enable audiences both around the world and at home to connect, enjoy and share in the memorable experience that is the Royal Highland Show, one of the country’s much loved major events.”

Culture Minister Neil Gray said: “I know how important events like this are to farmers, crofters and rural communities more generally. As the Royal Highland Show celebrates its 200th anniversary this year I’m delighted that this important and high profile event will be welcoming people in person again. The Show, which brings together Scotland’s world famous food and drink, traditions and culture to be enjoyed by attendees from around the world, will once again support Scotland’s events supply chain which has been particularly hard hit by the pandemic.

“I am delighted that Scottish Government funding will enable the Royal Highland Show to showcase online all that rural Scotland has to offer and celebrate, significantly increasing the reach of this event and enabling people across Scotland and all around the world to experience the rich variety of activities the Show has to offer.”